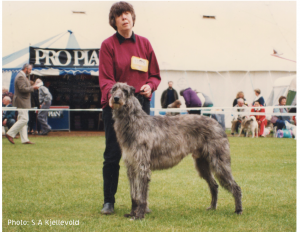 «I was brought up in a dog showing home and started to handle my mothers Dachshunds at 11 years old.

When she died I took over her Flaunden kennels’ and during the 1960’s/70’s had one of the most successful Dachshund kennels.

I was the first person to breed champions in all 3 coats of miniatures.

In 1968 I finally achieved a childhood ambition to own a Deerhound, her name was Orange Bridget of Carnus.

Over the next 40 years bred just 36 puppies but they included 5 UK champions, Am/Canadian champion and 2 other CC winners.

Now I just have one pet Deerhound and a rescue lurcher.

I started awarding CC’s in 1963 and now award CC’s in Deerhounds, all varieties of Dachshunds, Norwegian Elkhounds, Rhodesian Ridgebacks and Irish Wolfhounds.

I also judge the Hound group at Championship level.»

Do NOT follow this link or you will be banned from the site!